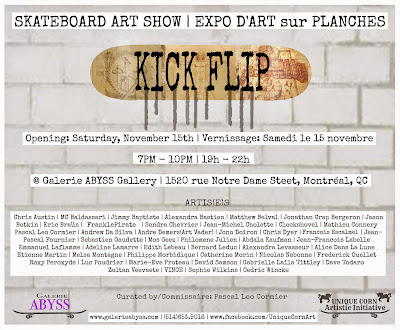 My intrigue with Skateboarding most definitely started with Bart Simpson, but I remember being about 10 or 11 years old when me and a friend of mine were just standing in the school yard and staring at this older kid doing Wall-Ride tricks with his giant 1980s skateboard, and I was immediately sold. I knew right then and there that skateboarding would be my sport, and for the most part, many of the best parts of my youth were spent with a skateboard by my side or underneath my feet. To me, Skateboarding is one of the most artistic sports, there are no real rules, only potential as to what you can create with the environment that you are given, and this is my approach to life in general. This concept was very appealing to me, a boy who has been drawing and banging on musical instruments since the age of 3, and who was getting sick of Baseball practice.

Growing up looking at skateboard magazines and catalogs, a lot of my earliest artistic influences came from that universe, and in a lot of ways, the whole Low-Brow/Underground/Pop-Surrealism Art movement came from that same skateboarding and punk rock scene that I grew up in. When I was approached to curate a Skateboard Art Exhibition at Abyss Gallery, the answer was an obvious YES. With this exhibition, I want to pay tribute to the skateboarding culture that influenced this Art movement and gave me such great therapy in my younger years.

KICKFLIP, named after a popular skateboard move, is a group exhibition featuring nearly 50 of Montreal’s most notable Artists with over 80 Works of Art done on Skateboard decks. KICKFLIP seemed like an appropriate title because I like exploring the concept of flipping an object from its original purpose into a new one, in this case, from Skateboard to Work of Art.

Posted by Pascalistic at 3:05 PM